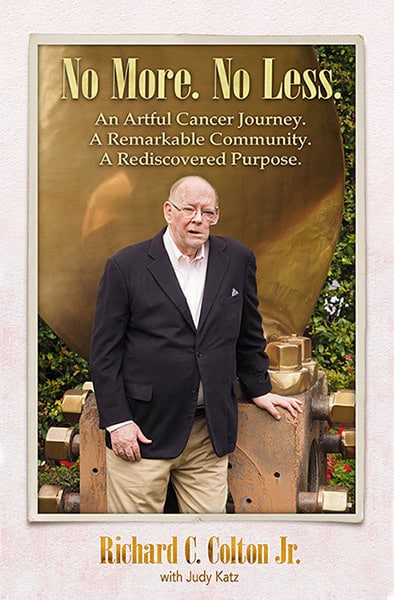 No More. No Less. by Richard C. Colton Jr.

No More. No Less. is the story of New Orleans philanthropist Richard C. Colton Jr.’s almost two decades-long struggle against cancer, and the spiritual journey it unearthed inside him. A cascade of treatments plays out over these pages, involving chemotherapy, radiation and three major surgeries—the last of which cost him a radical resection of the left side of his face, altering his appearance forever. With his life hanging in the balance, the author asked for a miracle—and his wish was granted. This is story of a plea, a promise, and the loving support of a community that gave a man back his life, so he could do more good in the world.

Facing’ Surgery, and Putting on a Brave Face

Dawn came quickly, light spilling into my hotel room like sugar from a spoon. As I dressed and washed up, it occurred to me that this might be the last me I would get to shave the face I had called my own these past seventy-odd years. I figured I might as well take the opportunity. As I drew the razor across my cheeks, I took stock of myself in the mirror. The chemo and radiation had reddened my skin, which was now spotted with masses of scar tissue. But it was still my face. Though it had changed over the years it was all what I expected to see when I looked in the mirror. It was who I was, at least in a cosmetic sense. Perhaps this would be the last me I would get to see this version of myself. I wondered if I would recognize myself after the surgery, and what impact that might have on my psyche. I toweled off, took a deep breath, and headed downstairs.

Beyond Expectations
This Book is No Less Than a Masterpiece.

Serving as Richard Colton’s surgeon over the course of three extensive head and neck operations for his metastatic skin cancer has offered me an opportunity to get to know an extraordinary human being.  When cancer has its grip on you, your attitude counts.  This man’s “courage under fire” is exemplary and inspirational.  Despite a dramatically altered appearance he not only survived but thrived with his head held high.  Kudos to Richard Colton for giving us this heartfelt and candid accounting of his cancer journey, which is going to bring hope and comfort to others “facing” any type of difficult challenge—as we all do in life.